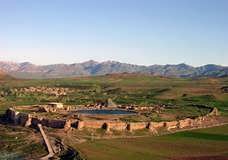 At the top of the green mountains of Takab, West Azerbaijan Province, there's the greatest Iranian and world ancient Zoroastrian's pilgrimage point which is known as "Soleiman Throne" or 'Takht-e Soleiman". It has been the well-known fire temple of Azarghoshnasb and its immortal fire and the mythical lake of Godess Nahi d for the promised messenger's Mother

The historical location and the 'Takht-e Soleiman" is located in the suburbs of Afshar, 45 km north -east of Takab , Miandoab. To reach the location, there're 2 options: from Zanjan to Takab via Bijar, or Miandoab to Takab via Shahindezh and then through the mountainous road of 45 km east-north the ancient walls of (Takht-e Soleiman). The shortest way from Tehran is via Zanjan, Nikpey, Dadi which passes named after Soleiman Nabi, among which are: Takhte Soleiman in Sehezar, Tonekabon, Kerman shah, Khorasan, Ethiopia India, Mashed, and the tomb for Soleiman's mother and sister in Fars and Khuzestan Provinces. Principally, Soleiman "s name has been mentioned in seventeen different verses and he's been treasure in this place; probably it's still in the depths of the lake and waiting to be found. In 1838, Rawlinson, the English discoverer, visited the place for the first time. In Pahlavid era, German Erich Schmidt flew over the site and took interesting aerial photos and published a book titled "flying over the Antique Cities 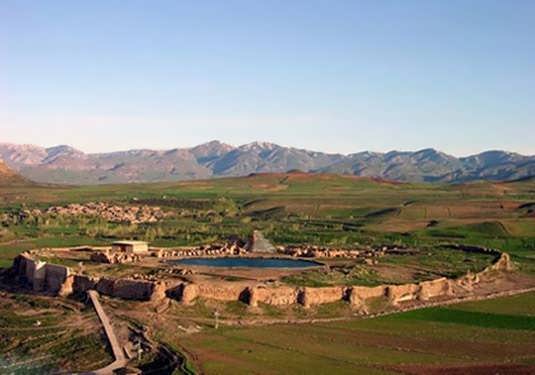