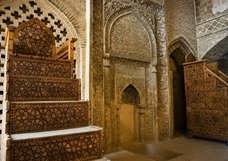 Among all the cities of Iran, which each has an individual ancient precedence, Hamadan has a special place. Some historians believe that Hamada's construction dates back to 3000 BC. And according to an inscription from the first Assyrian king, it is attributed to 1100 BC.

Among all the cities of Iran, which each has an individual ancient precedence, Hamadan has a special place. Some historians believe that Hamada's construction dates back to 3000 BC. And according to an inscription from the first Assyrian king, it is attributed to 1100 BC.

The Central Square in Hamadan was designed by a German engineer in 1307 Solar year. (1928 A.D.) This divided the city into six main avenues, and is considered as the main part of the city. Hamadan city with the height of 3,580 m. is located on the slopes of Alvand Mountain, so it is very cold in winter. According to 1992 cencus Hamadan has a population of 374,541. This city connects the central part of Iran to the west and Kermanshah-Sanandaj Roads passes through this city.

Hamadan is 336 km from Tehran by road and 271 km by air. There is an airport, with weekly flights from Tehran and vice-versa. This city has one first doss and few smaller hotels.

Here are some important attractions of Hamadan:

The Tomb of Esther & Mardecai

The building is made with bricks and stones. Inside the brick dome and upon the Plaster work of the walls, there are some Hebrew inscriptions.

In the center of the square chamber of the tombs, there are two beautiful boxes on the sepulchers. On the southern tomb that belongs to Ester. The second box on the Mordecai tomb is similar to the first one.

A relief Hebrew inscription that was plastered has been fixed on the mausoleum walls. The Hebrew writing on Ester's box and the relief plaster belong to 8th or 9th centuries AH.
The structure dates from the thirteenth century. The building consists of an entrance gate, a vestibule, two tombs, portico, and Shahneshin.
This monument is a valuable and religious building for Jews. In addition it has a historical importance.

The historic city of Hamedan is a beautiful center which forms the gateway to the western regions of Iran and lies about 337km. from Tehran. Hamedan, which nestles under the towering Mount Alvand, has several monuments worthy of interest while lacking antique vestiges. The best on covers the tomb of the famous Ibne Sina called Avicenna by the Western world. Ibne Sina was one of the most famous Persian philosophers and scholars in the Middle Ages who died in Hamedanin1307.Avicennawas a prodigy who knew the Koran by heart at ten and went on to become the leading philosopher and physician of his age, writing poems and compiling several scientific books and the encyclopedia called Daneshnamehe Alai (Ala's Book of Knowledge). This prince of philosophers left a treatise on medicine which was translated into Latin and exerted a tremendous influence evening the West. His mausoleum is a modern structure and was erected in 1952.Twelveconcretecolumnssupportitsconicalroofabove the sepulchral which is decorated with inscriptions recalling the work of the "Prince of Philosophers". 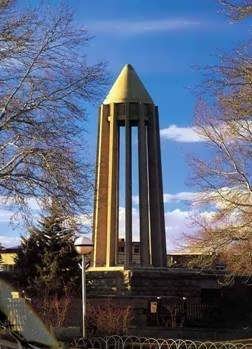 Lalejin city is located on the north of Hamadan and is the most important pottery centre in Hamadan Province, which is one of the souvenirs.

Ghare Ali Sadr (Ali Sadr Cave) which is located on the north west of Hamadan near Ali Sadr village It is 81 klm from Hamden to this cave from Bijar Rood. This cove is one of the longest caves in Iron, which is possible to go only 11 klm of it by pedal boot and there is no living creature in it. Mosalla Tappeh is situated in east of Hamadan and is not for from the centre of the city. The only remainder of this hill is a rampart from the Achaemonide period. "Ganjnameh" consists of two stony tablets, which is located near the city.