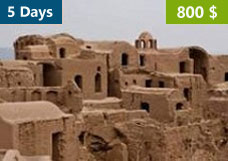 Kerman city with a height of 1755 m. is located on a nigh margin of Kavir-e-Lut, is counted as one of the oldest cities and its construction is attributed to Ardashir-e-Babakan in 3rd century A.D. Kerman city has a moderate climate and the average annual rainfall is 135 mm.
The distance between this city and Tehran is 1064 klm and is on Tehran-Bandar Abbes and Zahedan route. Kerman airport is counted as one of the main airports which have doily & weekly flights to Tehran, Ahvaz, Yazd, Isfahan, Bandar Abbas, Mashhad and Shiraz. Also the Trans Iranian Railway passes through this city, and Kerman-Sirjan-Bender-s-Abbes railways will be exploited next year.


Kerman with a population of 332,644 (1992) is the first populous place and Sirjan the second in this province.

Bam citadel
Cities do not die after being abandoned. They are alive even when the earthquake ruins them. When on December26, 2003; an earthquake killed almost a generation of the Bam it was thought that the 2000-year-old history of the man had also buried under the debris. Nevertheless, the fact is that the world largest complex made of sun-dried bricks is still alive and it is one of the best hosts for the tourists.

Arg-e-Bam (Bam Citadel) with an area of200 hectare is located on the eastern north of Bam and at the foot of an enormous rock; it was once the old city of Bam. The old Bam consists of 4partsand38 watch towers. The main materials of the castle were adobe, clay and chaff.
It is listed by UNESCO as part of the World Heritage Site "Bam and its culture landscape ".
This enormous citadel on the Silk Road was built before 500 BC and remained in use until 1850 AD. It is not known for certain why it was then abandoned. The 2003 Earthquake in Bam destroyed more than 80 percent of the Citadel. As a World Heritage site several countries are cooperating in the reconstruction and after comprehensive researches the authorities announced that the citadel would be rebuild. 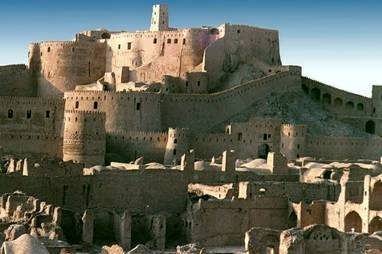 The Hamam or Ganj Ali Khan public bath was built right in the middle of Kerman Bazaar; this treasure includes various wall paintings and a fine collection of Iranian handmade glassware, woodworks and marbles. The old Hamam has a very detailed and logical architecture specifically designed for a public bathhouse. It has various chambers each open to another one, in the form of a complete circle .The genius architect designed the passages and the corridors curved to stop the outside cold weather to storm the bathhouse. The principal doorway adorned with murals depicts animal scenes. Its demolished plaster works and paintings of Safavid era were restored in 1332 AH by a man called Mirza Shokrollah who, inspired by Qajar paintings, could finally manage the restoration. There is a marble table at the entrance that poetically reveals the age of the building, which is 1020·A.H. The staggered entrance gives access to a first chamber surrounded by SIX spacious apses. Close to a pool for first ablutions, bathers could undress and have a rest. These narrow passages led to a row of dome-covered balk, each to serve particular purposes such as massage, Hot and cold baths and Etc.

Hamam-e Ganjali Khan has recently been converted into an anthropology museum with true-to-life wax figures banging back the memory of everyday scenes of the past. Today the old Hammam assumed the form of an anthropological museum of waxed men performing various stages of their ablutions. Specially, locally made bars of soaps, wooden combs, shoes and other objects are also displayed. 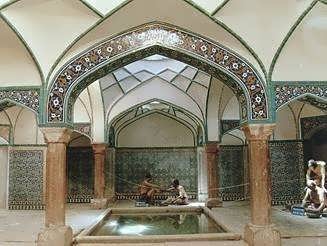 Imam mosque is one of the largest mosques in Kerman constructed in the Seljuk dynasty. This mosque has several chambers, arched entrance ways and a sweeping court Imam mosque has also harmonic proportions with its exquisite brickwork typical of its period built in the 12th century. This mosque is located in the south of Kerman bazaar at the heart of tile old section of the city.

The county of Mahan is located 35km south-east of Kerman and is situated on the foothills of the mountains in an area famous for its natural springs .Bagh-e-shazdeh( the prince's garden) is located 6km south of Mahan. The garden is very attractive and its splendid historical buildings were founded in the Qajar period. TThere are various pools constructed in the garden that is sheltered with fine trees. In the year 1991, the premises were completely renovated because of the commemoration ceremony of Khaju Kermani. A traditional guest house has been constructed in the city center for the use of tourists and visitors.

An adobe castle with 1,000 years old which is situated in 110km from Kerman city. The medieval mud brick city of Rayen is similar to the Arg-é Bam city and has second rank of mud brick –made building in the world after Arg-e- Bam.

The region enjoys a very desirable climate being located on the foothills of Hezar Mountain. This mountain is the highest peak in the province and third highest in Iran, rising to an altitude of 4,450m.hezar mountain is covered by snow most months of the year and is also famous for its breathtaking waterfall.

Shahzadeh Garden is an attractive sight some 35 Jun. from the town of Kerman. This 19th century garden was laid out for a prince of the Qajar dynasty, and is distinguished by magnificent fountains that are all the more enticing for their vicinity to the parched desert. The garden is registered among the nation's historic sites, which requires visitors to take care as they walk around. A front building provides access to it, while the prince's pavilion lies at the other end. 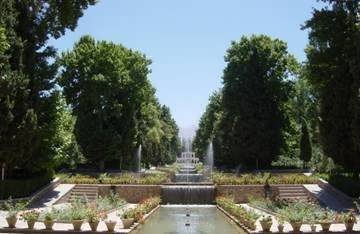 The industrial museum of Kerman

Haj Ali Akbar San'ati was a generous man who, in 1938. Founded a charity and a school to protect orphans. This charity was brilliantly successful in educating its students not only in the scientific fields but also in various artistic branches. In 1976, a part of this charity including a library, a cinema hall, several galleries and a garden were converted into a cultural center and a public museum. This museum is located in a beautiful construction being accessible through an arched high entrance built in 1947. By the way, bricks with arched doors and windows make them a domed building. The entrance is also made of plain and glazed tiles together with inlaid turquoise and black tiles.

Paintings, statues and many other art works of Iranian and foreign artists are exhibited in this museum. More than one thousand works displayed in this museum are created by Sayyed Ali Akbar Sanati himself being a student of this education center and a close disciple of the founder of the charity. He has finished various courses in art schools and colleges and has secured tus university degrees before appearing as an outstanding artist in today's Iran.