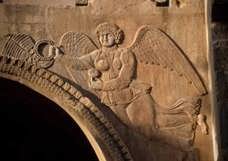 KermanShah city is situated in 47" 4' east longitude and 34° 18' north latitude and is the center of Kermanshahan Province. As it is situated between two cold and warm regions enjoys a moderate climate. KermanShah has a moderate and mountainous climate. It rains most in winter and is moderately warm in summer. The annual rainfall is300-500 mm the overage temperature in the hottest months is above22° C.

Because of the natural circumstances, this city is situated on the slopes of Kuh-s-Sefid, which is the most famous mountain in the suburb of KermanShah. The length of this city is more than 10 klm which runs alongside Sarab River and Valley. The height of KermanShah city is 1,420 m above sea level. The population was 631,199 in 1992. The distance between KermanShah and Tehran is 525 klm and there are so many industrial centers, oil and sugar refineries, and cement, textile and flour factories, etc the airport is located in north east of the city and the distance from Tehranis413 klm by air. There are more than9 three & one star hotels in this city. There are so many entertainment places, parks and monument sin and around the city.

Here are some important attractions of kermanshah:

KermanShah owes its name, the Town of the King of Kerman, to the fact that it was founded in 390 A.D. by Bahram IV; who had been governor of Kerman before he ascended the Sassanian throne. It possesses a noticeable building (1898), the tomb and Takiyeh of Mo'aven-ol Molk, a Qajar complex standing in the middle of the town near a stream. The interior is a riot of tile-work, especially noteworthy being pictures of Mo'aven-ol Molk preaching (in the entrance court), of animals and mystical emblems (in the Takiyeh court) and in the dome chamber a fine series of portraits of Kings throughout the ages and are presentation of scenes from the life of the Prophet in nineteenth-century garb, with decapitated enemies piled in horizontal rows. 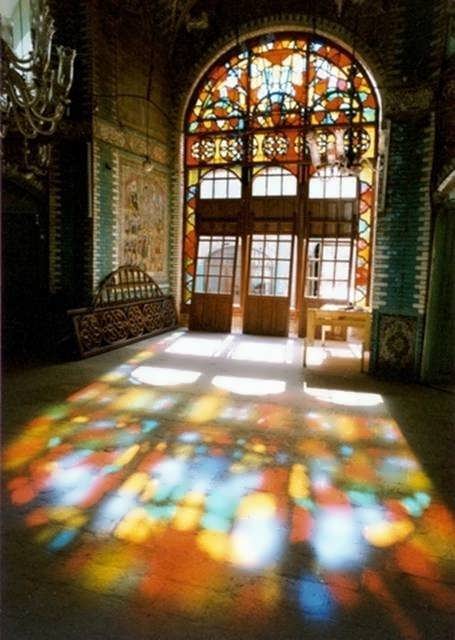 Taqe Bostan grottoes, a few miles west of KermanShah, celebrate the revival of rock-sculpture. These carvings are of special interest. With one exception they are the only Sassanian rock carvings outside Fars. Unlike nearly all other Sassanian sculptures they do not date from a short period of seventy years in the third century. In subject and treatment, moreover, the two principal reliefs at Taqe Bostan are utterly different from anything else in Iran. In the left of a great mountain is a little garden watered from a nearby spring at the entrance to the two grottoes stands a bas –relief representing the investiture of Ardeshir II (379-83A.D.), who is flanked by Ahura Mazda and Mithra. In the small grotto, an oblong room with simple barrel-shaped roof, are carvings of Shapur II and III, dating from the reign of the latter (383 -88). But it is the large grotto which is of outstanding interest. Its sculptures are of much more recent date (610-26).The carved facade, with its Nikes floating above cornucopia and bearing a garland of ribbons, its pilasters decorated with trees of life bursting into intricate bouquets of flowers, has no Sassanian parallel. On the end wall within the grotto there are two scenes, one above the other; the upper shows the investiture of Khosrow II and the lower portrays the same monarch on his horse, Shabdiz. It is not these, however, but the sidewalls which command attention. For here are the famous hunting panels, with their intricate design and vivid portrayal of animals. To the left there is a boar-hunt in a swamp; to the right, a stag-hunt in a forest. A wealth of little scenes and incidents charms the eye: the elephants struggling in the swamp or carrying away the spoils; stags and riders in combat; whole ranks of boars realistically portrayed; strings of camels leading off dead stags; boatloads of women clapping their hands; a poor girl holding a parasol over a king. 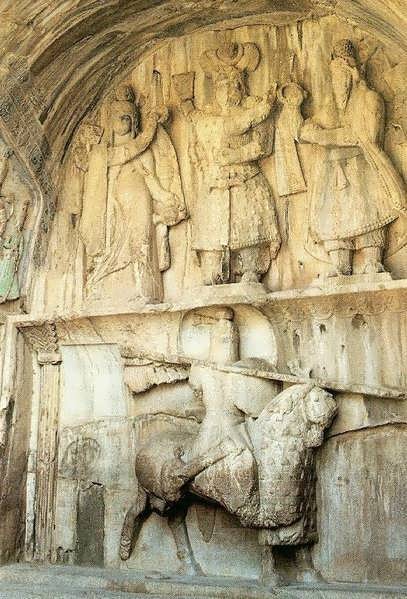