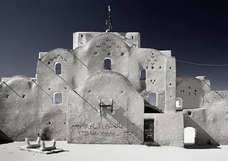 Yazd is one of the oldest and a typical desert city in Iran.
Some of Islamic historians attribute its construction to Alexander the Great, who built a prison there for great men and at the beginning of the Islamic era Yazd was known as Alexander's prison.

Yazd is famous for its architecture and is one of the most beautiful cities among the desert cities. This city with the villages and districts are the most important gathering centers of Zoroastrians who are living in this area from ancient times. There is a sacred place called Pire Sabze Check-Check at 72 km of this city, where some Zoroastrians from different parts of the world gather for religious ceremonies every summer.

The distance between Tehran and Yazd is 508 km by air. Yazd airport is one of the main airports, which has daily and weekly flights to Mashhad, Isfahan, Zahedan, Kerman, Bandar-e-Abbas and Tehran. Also Tehran - Kerman and Bandar Abbas railway with a weekly scheduled service, posses through this city.

The distance between Tehran and Yazd is 508 km by air. Yazd airport is one of the main airports, which has daily and weekly flights to Mashhad, Isfahan, Zahedan, Kerman, Bandar-e-Abbas and Tehran. Also Tehran -Kerman and Bandar Abbas railway with a weekly scheduled service, posses through this city.

Here are some important attractions of Yazd:

Consisting of a mosque and a public bath, a caravansary, a mausoleum, a Tekye (a religious place for mourning) three water reservoirs and a bazaar, each of which having its own beauty. This complex was founded by the governor's wife of Yazd in -the 16th century. 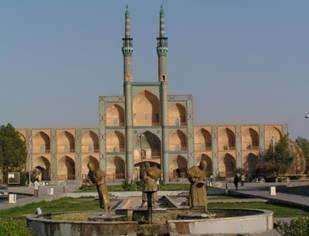 Comprising a large garden and some buildings, it is a famous complex built in the original Iranian style which was watered by a qanat of this same name. In the past, it was the residence of the governor. The most impressive part of the complex is a building with a ventilation structure (badgir) on the roof and a brook in the interior. The air, passing through the badgir is con-ducted to the flowing water to cool the interior. Being 33 meters high, this badgir is an architectural triumph. Lattice doors and windows covered with colored glass afford a pleasing sight to the building. 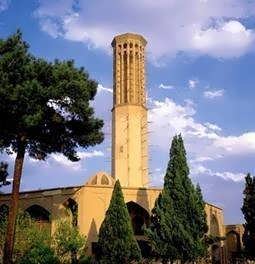 This temple, built on a hill, is encircled by evergreen trees. A large round pool increases its attractiveness. In the Fire-Temple there is a fire burning since 700 years ago, around which there are rooms for blessing. Plinth courses and the capitals of the pillars with beautiful reliefs are eye-catching. The architecture of this historical monument is by some extent similar to the architecture of the Fire-temple of the Persian in India. 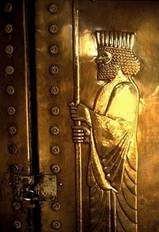 The lame' Mosque, is a fourteenth-century Islamic conversion of a Sassanian fire temple, rebuilt between 1324 and 1365. The iwan and sanctuary are impressively tall in comparison with most Islamic buildings; two Seljuk minarets of baked brick studded with blue tiles, the highest in Iran, daringly contrasted with the dome's voluptuously low curve. The tile-work has recently been skillfully restored and a modern library built to house the mosque's valuable collection of the books and manuscripts. Within there is along arcaded court where, behind a deep-set south-east iwan, is a sanctuary chamber. This chamber, under a squat tiled dome, is exquisitely decorated with faience mosaic. Most of the monuments in Yazd are distinguished by bad-girs hose slender elegance may well have inspired Muslim architects to endow Yazdi buildings with the slim pencil-like minarets on the lame' Mosque(or the Imamzadeh ]a'far, and even the main entrance to the bazaar an opulent stage-setting in its brilliant blue tiles).Yazd displays an original kind of architecture: very high and narrow portals surmounted by two endless twin minarets, which is illustrated by the lame' Mosque in which the handsome flag-stones under its porch are engraved with several forms of writing. 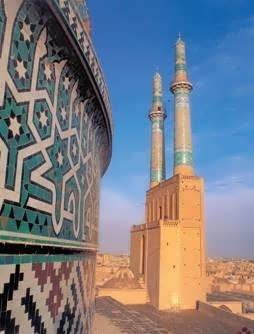 The construction of this house dates back to about one century ago, this house is in the neighborhood of Salehebn-e-Ali. It comprises two distinct sections of the interior and courtyard planted with trees. It has a pool in the middle which used to be used as a place for the reception of guests. Now, the College of Architecture uses this building. 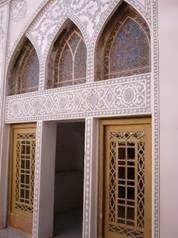 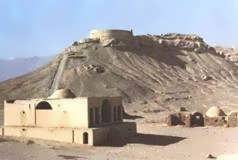 A Tower of Silence is a Parsi funerary tower erected on a hill for the disposal of the dead according to the Zoroastrian rite. Such towers are circular and about 25 feet (8 m) high, built of brick or stone, and contain gratings on which the corpses are exposed. They had an almost flat roof with a perimeter slightly higher than the center. The roof was divided into three concentric rings. The bodies of men were arranged around the outer ring, women inside the second circle, and children in the innermost ring.

Zoroastrians expose their corpses to the sun as they believe it has the ability to destroy pollutants and disintegrate flesh.

After the sun disintegrated the body and vultures have picked the bones clean, they fall into stone ossuaries with holes to allow the deceased to look upon the Sun and must not suffer contact with either fire or earth.

Zoroastrianism was founded by ancient Persian prophet (Zarathustra) 3500 years ago; the followers consider death a temporary triumph of evil over good. They believe a dead body is impure and the evil spirit will therefore enter anything exposed to the corpse.

Zoroastrian population has stopped this ancient practice for forty years now. Today, they bury bodies and use a layer of concrete to secure the ground from contamination.

Towers of Silence still stand in many parts of Iran, especially in the provinces of Yazd, Kerman and Tehran.

Zoroastrian's cylindrical cemetery or Dakhmeh as it is locally called. Although lots of years have passed since their construction, they are still standing at the edge of the beautiful desert near Yazd city. The desert attracts anybody's attention when traveling to Yazd. The desert having its own specifications, hot and dry during days and cold during nights with its running sands, can never be matched to any other place .As you step in to this desert you see two very strange cylindrical constructions before you on the top of two hills which make you wonder what they can be and what they have been constructed for? To answer such questions and other questions which might occur in your mind? It should be mentioned that they are .as a matter of fact, the Zoroastrians' cemeteries in which the corps of their dead relatives would be left alone .while they were settled in a sitting position so that they should be eaten by birds and insects. And after a few days, the remaining of the bodies would be buried. However, at the foot of these hills are now the modem cemeteries of Zoroastrians in which the dead are buried according