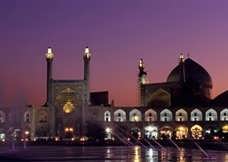 When French poet Renier described Isfahan as 'half of the world' in the 16th   century it was the myriad wonders of the square called Naqshe Isfahan that inspired him. The description wouldn't be out of place today, because while it is now known as Imam Sq (Meydane Imam: Map p216) it is still the home of arguably the most majestic collection of buildings in the Islamic world.

Naqshe Jahan means 'pattern of the world', and it' a world that owes much to the vision of hah Abba the Great. Begun in 1602 as the centre piece of Abbas' new capital, the square was designed as home to the finest jewels of the Safavid empire the incomparable Imam Mosque, the supremely elegant Sheikh Lotfollah Mosque and the indulgent and lavishly decorated Ali Qapu Palace and Qeisarie Portal At 512m long and 163m wide, this immense space is the second-largest square on earth -only Mao Zedong's severe Tiananmen Sq is bigger. 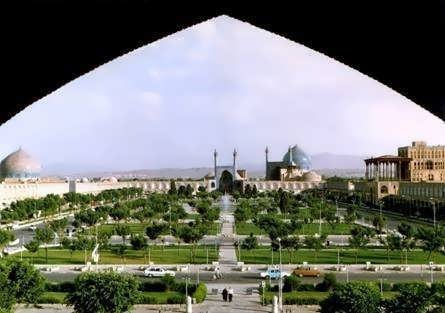 The square has changed little since it was built; the upper levels of the many-arched arcades that surround the square are empty these days, though currently being restored as a museum of Isfahans history. The open space has been re instituted several times, most recently by the Pahlavi, who added the fountains. At either end of the square. You can still see the marble goal posts used in regular polo games 400 years ago. You'll see the e polo game depicted on miniatures for sale around the square.

The square is best visited in the late afternoon and early evening when local families flood in to outnumber the Iranian and foreign tourists. This is also when the fountains are turned on, the light softens and the splendid architecture of the perimeter is illuminated: you can't beat the view.