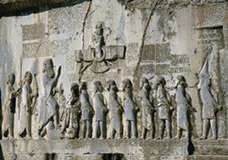 On the slope of the stately Bisotun Mount in Kermanshah, lays the magnificent inscription and bas-relief of Achaemenid King Darius the Great.
This historical monument, which dates back to 2,000 years, represents a masterpiece in irrigation, stone sculpture, as well as construction of stone structures, including a bridge.

The inscription and bas-relief chiselled into the heart of the mountain are reminiscent of the splendid Persian Empire. It is a favoured tourism destination and a symbol of national historic heritage. 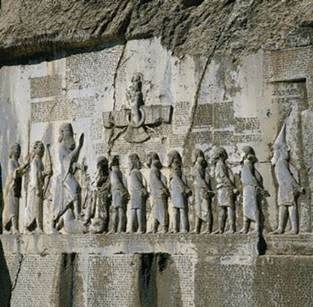 The cuneiform script is the most credible historical relic dating back to the Achaemenid era. Darius I (521-486 B.C.) ordered the inscription to be carved on the face of a rock at a height of 100 meters from the road.

The bas-relief depicts Darius, his archer and spearman. Raising his hands in prayer to the deity in Zoroastrianism, Ahura Mazda, Darius has put his foot on Gaumata, one of the 10 usurpers dethroned by him, while nine captives are in chain before him.

An image of Fravahar hovers above the king’s head. The Guardian Soul or Fravahar, an ancient symbol of Zoroastrians, is offering “the ring of power” as a token to Darius.

Fravahar was the symbol of Persia for hundreds of years. Donned in a long dress, Darius sports wavy rectangular-form beard. The king wears a scalloped crown. A line of captives stand behind him.