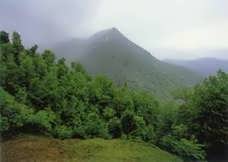 More than one-tenth of the country is forested. The most extensive growths are found on the mountain slopes rising from the Caspian Sea, with stands of oak, ash, elm, cypress, and other valuable trees. On the plateau proper, areas of scrub oak appear on the best-watered mountain slopes, and villagers cultivate orchards and grow the plane tree, poplar, willow, walnut, beech, maple, and mulberry.

This zone covers an area of 53,000 hectares and is 180 km away and to the west of Shahr-e-Kord. From north it reaches the borders of Lurestan, from south to Ardal, from east to Shahr-e-Kord and from the west to borders of Khuzestan province. The main forest area of this region includes Chahak, Talkhehdan, Badam Shirindan, Voleska, Chekooz and Cham Jendar.

Chaloos Forests, Nooshahr
This area is close to the sea, with high plains, suitable regional conditions, verdant, with heights and valleys and dense forests, lakes, elevated waterfalls. Besides it being in the vicinity of Alam Kooh. All speak of it being unequal to its kind in Iran and even the world. A place worth visiting. 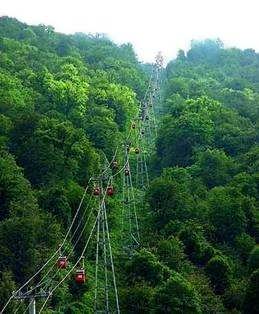 Forests, Sistan Va Baluchestan
The forest areas of Sistan Va Baluchestan province are scanty and not at all dense like the forests of the north and west of Iran. The forests of this vicinity are scattered around the elevated areas, springs and along the river banks. Near Konarak in the Chabahar region are traces of forests with tamarisk and the Indian fig trees. These are sparse and on the decrease due to environmental conditions and soil erosion. But in the borderline area in the vicinity of the Taftan and Panj Angosht Mountain Ranges the scene changes because of climatic conditions. Various species of trees can be found here such as the lote tree, wild almonds, pistachio; Indian fig, Indian tamarind, jasmine, oleander and ...
These forests extend over an area of 1.5 million hectares throughout the province and are the habitat of different wildlife.

Kashaf Rood Valley, Mashad
The Kashaf Rood River is 240 km. in length and originates from mountain ranges of Hezar Masjed and Binalood, which flows through this valley. Hillocks about 20 km. southeast of Quchan separates this valley from the Atrak Valley. About 900 villages surround this valley. During autumn the nomads residing here take full advantage of their surroundings. Public spots are plentiful in this valley.

Loot Plain, Zahedan
The plain of Loot is the largest hollow or pit in the plateau of Iran and a part of which is located between Sistan Va Baluchestan. This plain is one of the hottest and driest in the world with a minimum trace of water. To the west of this plain, is another area of wilderness called Namakzar, which is impenetrable in the rainy seasons. The eastern half of the plain is covered by moving sands, but a part of its southern sector is penetrable. Due to the hot sun and strong winds, heavy masses of sand move to the south and the southeast, forming a chain of sandy hillocks.

Plains, Mazandaran
In Mazandaran province, if the elevations below 100 m. be considered as those limited to the plains, two particular areas come into focus. The first is the narrow strip of Ramsar - Alamdeh and Galugah - Kord Kooy. These being near the forest heights and have a considerably steep gradient towards a limited flat region. The vast plains of the Amol - Babol and Sary - Behshahr segment, which have been formed at the mouths of Haraz, Babol, Tajan and Neka Rivers, can be accounted as the second sector. Climatically, the plains of Mazandaran are moderately warm and the temperature rise is from west to east, thus bringing about a relative decrease in rainfall in the same direction in the region. These plains encompass various important cities and also rural areas, which bear an influence on the economic and industrial factors. Forest landscapes, the sea, citrus orchards, tea gardens, and even the natural cuts and separations in the forest heights bring forth a wonderful and matchless scene. 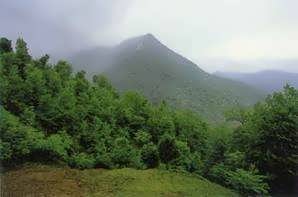 Have you ever heard about the most exceptional forest? The trees which are in the water half a day and out the other half of day!

To see this mysterious forest, you have to go to "Laft" Port a small port on the North-west of Qeshm Island. The proper time to watch it will be from morning to noon. In case you get to "Laft" Port at 5:00 or 6:00 in the morning, you won’t see anything at first glance, but gradually the forest will appear. About 7:00inthe morning, the dark patches will cover the surface of water and the trees will show up soon, half of the trees in and the other half out. 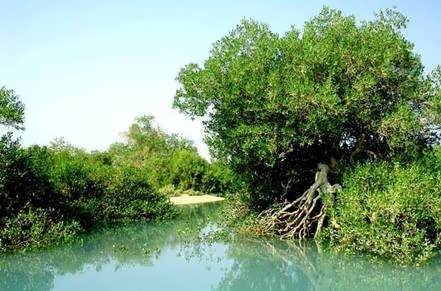 If you are an adventurous, get a boot and walk in trees; but be careful since it is muddy, take off your shoes and socks and also 'be careful of the spikes of the trees.

Mangro forest (by the scientific name Avicenna) is the other name given to Harre forest because of its special live in this forest south ecosystem in Laft Port and north of Qeshm Island to Khameer Port, 140 km If you're lucky, you may be able to take west of Bander-Abbas and the whole forest good pictures of these birds and is about 6012hectare. The wonderful forest is always open to flow and ebb i.e. in ebb tide the trees are out like patches of forest and in tide all the forest disappears. One of the specifications of these trees is to desalt the salty water of sea. The height of these trees is about to 4 meters with a diameter of 30 cm with oval shape leaves. According to lab tests the leaves are suitable for animals like sheep, cows, etc. In forest covered area which is called "Khoor", the depth of water is about 3 m and most of the emigrating birds like albatross, pelican and other scarce birds and scenery.