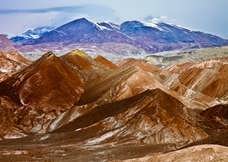 Iran consists of rugged, mountainous rims surrounding high interior basins. The main mountain chain is the Zagros Mountains, a series of parallel ridges interspersed with plains that bisect the country from northwest to southeast. Many peaks in the Zagros exceed 3,000 meters above sea level, and in the south-central region of the country there are at least five peaks that are over 4,000 meters. As the Zagros continue into southeastern Iran, the average elevation of the peaks declines dramatically to under 1,500 meters.

The center of Iran consists of several closed basins that collectively are referred to as the Central Plateau. The average elevation of this plateau is about 900 meters, but several of the mountains that tower over the plateau exceed 3,000 meters. The eastern part of the plateau is covered by two salt deserts, the Dasht-e Kavir and the Dasht-e Lut. Except for some scattered oases, these deserts are uninhabited.

Iran has only two expanses of lowlands: the Khuzestan plain in the southwest and the Caspian Sea coastal plain in the north. The former is a roughly triangular-shaped extension of the Mesopotamia plain and averages about 160 kilometers in width. It extends for about 120 kilometers inland, barely rising a few meters above sea level, then meets abruptly with the first foothills of the Zagros. Much of the Khuzestan plain is covered with marshes. The Caspian plain is both longer and narrower. It extends for some 640 kilometers along the Caspian shore, but its widest point is less than 50 kilometers, while at some places less than 2 kilometers separate the shore from the Alborz foothills. The Persian Gulf coast south of Khuzestan and the Gulf of Oman coast have no real plains because the Zagros in these areas come right down to the shore.

There are no major rivers in the country. Of the small rivers and streams, the only one that is navigable is the Karun, which shallow- draft boats can negotiate from Khorramshahr to Ahvaz, a distance of about 180 kilometers. Several other permanent rivers and streams also drain into the Persian Gulf, while a number of small rivers that originate in the northwestern Zagros or Alborz drain into the Caspian Sea. On the Central Plateau, numerous rivers, most of which have dry beds for the greater part of the year, form from snow melting in the mountains during the spring and flow through permanent channels, draining eventually into salt lakes that also tend to dry up during the summer months. There is a permanent salt lake, Lake Uremia, in the northwest, whose brine content is too high to support fish or most other forms of aquatic life. There are also several connected salt lakes along the Iran-Afghanistan border in the province of Baluchestan va Sistan.