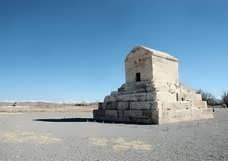 Cyrus died in529 during a campaign on the frontier of the Oxus and was buried in his capital Pasargadae in Fars.Pasargadaeissome70km. North of Persepolis and is easily accessible by the asphalted Isfahan road. The site of Pasargadae is approached by a large alley, shaded by large trees that bears left and, after crossing the river Polvar, lead directly to the Tomb of Cyrus.

Composed of two distinct elements, a gabled tomb chamber and a majestic plinth of six receding tiers, its original height approached 10.7 m. behind a low entrance, once secured by double-leaved doors, a short passage-way leads to a plain, rectangular tomb chamber3.2m. Long and 2.2 m. wide northeast of the tomb again, the entrance to what was once the walled Palace area is still marked by the remains of a monumental Gatehouse. With only its formidable column bases left to indicate its original lofty proportions, much its most striking feature is the unique four-winged figure that still stands almost intact on a single doorjamb. Wearing a royal Elamite robe that reaches almost to the ground and the divine triple-ate crown of Egypt, this gave faced figure remains an enigma, regarded by some as a guardian demon and by other as an exceptional portrait of Cyrus himself. The Audience Hall exhibits even more important features that distinguish the palaces at Pasargadae from those at Persepolis. The ground plan demonstrates the usual preference for oblong rather than square units; the few surviving parts of the superstructure –a single, tapered columns from the great hypostyle hall and three antae -illustrate a characteristic contrast in elevation between the tall central hall and its surrounding porticoes; and throughout the building one finds that carefully balanced use of black and white stone that is such a hall-mark of Pasargadae. A single antain the south-east corner –like another in the same corner of the Residential Palace-still bears atrilingualinscription,in Old Persian,ElamiteandBabylonian,saying"I,Cyrus, the King, an Achaemenian (built this)", while the surviving door jambs depict composite monsters or else groups of animals being led to a place of sacrifice. 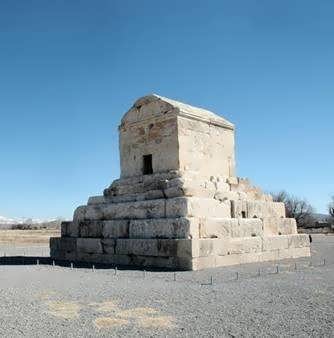 Unfortunately, nothing now survives of the imaginative bull, horseand lion-headed capitals that once surmounted the principal columns, 13 m. above the floor of the main hall. Some 100 yards to the north-west of the Pavilion, the denuded central hall of the Residential Palace still speaks for the extraordinary balance and beauty of early Achaemenian architecture.

Continuing north wards, still within the limits of the walled Palace area, one comes to the façade of a squarest one tower that was once identical in size and shape with the Ka'beh Zardusht at Naqshe Rostam. Known today as Zendan-e Solaiman, this much damaged structure has been variously interpreted as a fire temple. Further north again ,the whole site is dominated by the great stone platform, known as Takhte Madare Solaiman, that thrusts out from the western face of the Talle Takht, Composed of unusually large limestone blocks, the facade of the platform rises in 16 coursestoaheightofwellover43 feet. Unique in Achaemenian architecture, its wide rusticated joins give it a striking, ornamental appearance. Deep holes show where metal clamps one strengthened each horizontal course, while a closer inspection reveals the existence of many different "mason's marks" on the rougher, less finished blocks.