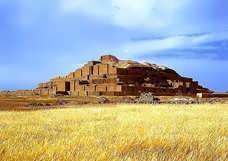 The ziggurat of Chogha Zanbil is the best-preserved and largest of all those discovered in early Asia. It was built of sun-dried brick and originally comprised five storey sand a chapel on the top storey. It was built in 1250 B.C. by the Elamite King Untash Gal for the Elamite deity "Inshushinak".

It is about 25 meters high and consists of several stories, made of mud brick and revered with kiln-fired bricks. The first three storeys have been preserved; attaining a height of25 m. originally the building must have been over 50 m. high. Whereas ziggurats usually consisted of superimposed storeys, each smaller than the last, that of Chogha Zanbil had each storey built up from the ground and nested into the preceding one. Each storey stood on a low base and rose vertically. The walls had pillars and niches. The first storey is 8m.high, the seconds 13A m. above the first, and the third and fourth must have been about the same height. During excavations in the mound, two bricks inscribed in Elamite script were discovered. A number of clay tablets and human and animal statuettes have been discovered around the temple. 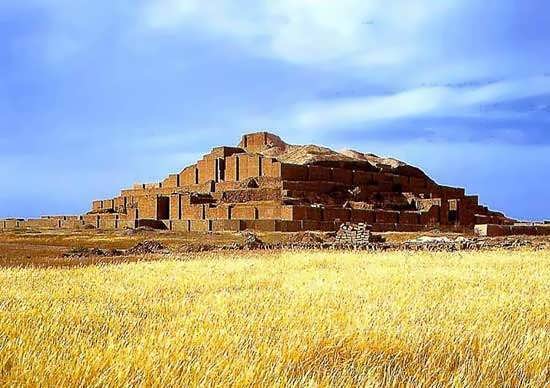